Differences between Migration (Settling) and Immigration

I'm currently rereading David Hackett Fischer's masterpiece Albion's Seed: Four British Folkways in America. This classic work should not need much introduction for informed readers. Basically, Fischer documents four British sub-cultures, their migration and settlement in America and their impact on subsequent American culture. No brief review can do it justice. 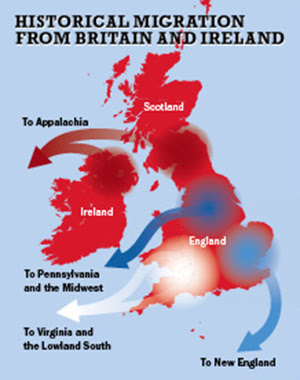 These "immigrants" were colonizers. They had no intention of assimilating into the native Indian cultures. Most insisted that the Indians assimilate into their British Christian culture or move west. There is a vast difference between subsequent immigration to America and settler/colonization movements. The words "migrant" and "migration" are used as convenient weasel words to obfuscate the central issue involved.

Fischer illustrates that British settler leaders in the 17th and 18th centuries well understood the distinctions between different types of immigration. Their explicit intention was to plant the "seed" of British culture in a new land. They came to make North America British in culture, norms and politics.

Fischer provides two telling quotes as chapter epigrams to make his point. Here's is William Penn's explanation of his purpose for settling the land that still bears his name (but, for how much longer?):

Colonies then are the Seeds of Nations, begun and nourished by the care of wise and populous Countries; as conceiving them best for the increase of Humane Stock. William Penn, 1681

Needless to say, this process is now ongoing in Western Europe and the southwest of the USA. The "populous" countries encouraging the "migration" are not wise, but they are brutal. From the perspective of the "mother countries," the purpose of "migration" is for the expansion of their political power and increased revenue (often to the determent of the colony).

Whole neighborhoods formed parties for removal; so that departure from their native country is no longer exile. He that goes thus accompanied...sits down in a better climate, surrounded by his kindred and his friends: they carry with them their language, their opinions, their popular songs, and hereditary merriment; they change nothing but the place of their abode. Samuel Johnson, 1773

It is no accident that Johnson's quote can be easily applied to the current Mexican invasion of the United States. It is the whole point for the West's traitorous elites support for so-called chain migration. Such policy slows down or ends assimilation as the settlers form enclaves in the host nation.

Any objective observer - much less self-defined intellectual - should understand the differences between legitimate immigration and settler colonization. Instead, they create an inexcusable package deal in which the former requires the latter. Sadly, today this dishonest package deal is being most vociferously promulgated by the libertarian-left and the "Objectivists" running the misnamed Ayn Rand Institute. Don't be fooled by these dishonest poseurs. The national self-interest of the United States or European nations is not their concern.

Whatever their economic rationalizations, the destruction of the West is what they support. This is what they champion as legitimate immigration:

Review: Fei Xiaotong. From the Soil: The Foundations of Chinese Society. Berkeley: University of California Press, 1992.


In his classic work Chinese sociologist Fei Xiaotong explains the nature of Chinese rural society based on his own original field work. According to the author the key concept in understanding Chinese culture is chaxugeju, which means “differential mode of association.” He contrasts chaxugeju with what he calls the Western mode of “organizational mode of association.” The Chinese form of social organization is bases on concentric rings of association that spread out from the individual at the center. These rings of association flow out in an ever widening circle from family, to kinship group, to village, to province, to nation. Loyalty also flows out in the same direction at an ever diminishing rate. All Chinese are born into unchosen associations that are sanctified by the concept of ritual.

The author observes that chazugeju has many ramifications. Perhaps the most important of these is that it leads to a society animated by situational ethics. This is because all social relationships are based on hierarchies that are defined and sanctioned by traditional Confucian tenets. In other words, standards of behavior and interaction depend on who is doing what to whom. According to the author, there are apparently no absolute standards of conduct in Chinese rural life. Xiaotong cites the Book of Rites “ten relationships,” which are fundamental rules for proper human relationships. The relationships are defined by hierarchies of social standing and power, such are fathers over sons, and husbands over wives: “Everyone should stay in his place” (65). Therefore, an action can only be correctly judged on the basis of not what was done, but rather on who did it and why.

Chaxugeju means that at the village level both government and law have little use in daily life. The concept helps explain why a powerful empire had little actual control over or influence upon the daily lives of farmers and village artisans. Rural people had no need of laws or courts. Their tradition of proper ritual and hierarchies based on patrilineages defines both right action and provided means of dealing with those who broke the social code. State magistrates had no role in daily village life. In a way, the “rule of ritual” operated as a social superego: “it is as if there were ten eyes watching you and ten fingers pointing at you all the time” (99). Although the author denies that Chinese society is unchanging, he does state that its system is static in nature: “Generally speaking, consanguineous societies are stable and static” (120). In fact, he adds that stability is the purpose of the system. He quotes Confucius, “Nothing should be changed until three years after your father dies” (130).

This book was a deceptively easy read. However after sitting down and attempting to write a short review of it, it is clear that it is far from a simple description of Chinese village life. Xiaotong makes fascinating, and at times profound, observations on nearly every page. His chapters on sex roles in Chinese life and “separating names from reality” were particularly insightful.

Grant W. Jones
My name is Grant W. Jones. I have MA's in both Military History from Norwich University and American History from Kansas State History. I currently live in Hawaii and have decided that a return to blogging will provide an outlet for my thoughts in these fields.